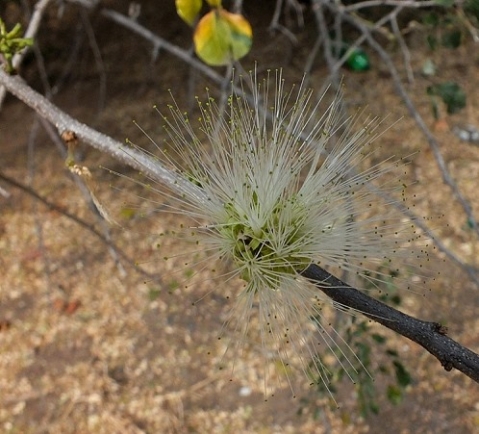 The stalked flowers of Albizia anthelmintica usually grow before the leaves from stem nodes. The tree may bear flowers at any time during the year, but mostly does so from late winter to after midspring. At this time the leafless tree becomes spectacularly covered in them before the other tree species respond.

Each fluffy flowerhead comprises several individual flowers bearing small, inconspicuous calyces and corollas. The show is stolen by the long, conspicuous, white to pale yellow stamens that are numerous in each head, forming semi-spheres of tiny anthers on long straight filaments. The head becomes about 4 cm in diameter. The thread-like style protrudes further than the stamens among them, but is not particularly noticed as it is thin and white.

The fruit to follow is a straight, flattened pod, papery and pale brown, bulging over every seed. The pod is about to 9 cm to 12 cm long and 2 cm wide. The seeds are olive-green, pale cream, straw-coloured or brown, attached to a thread-like stalk (Mannheimer and Curtis, (Eds.), 2009; Coates Palgrave, 2002; Van Wyk and Van Wyk, 1997; Pooley, 1993; iNaturalist).