Home » TYPES » Trees » Albizia anthelmintica, the oumaboom
Back to Category Overview
Total images in all categories: 11,544
Total number of hits on all images: 6,627,271 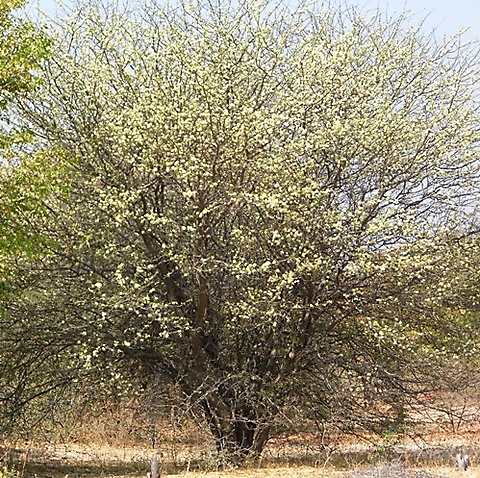 Why would Albizia anthelmintica be called oumaboom (grandmother tree) in Afrikaans?

Maybe oumas are more inclined to where cream-coloured dresses or wear them longer, i.e. with lower seams and higher collars, rather than for more years. The tree often has low branches, particularly when it is multistemmed.

Oumas are sometimes tough or indestructible in the eyes or needs of grandchildren who love them forever. These trees occur widespread, also in some places where hardly any other trees will grow.

Oumas might mention the late winter flowers more often, taking delight in the big splash of colour when much else in the veld is still waiting for signals of temperature and moisture. Grandchildren sometimes need cheering up.

Or oumas may remember that the wood was used in olden days to make plates and dishes to eat from. These utensils are forever important in the household domain. They were in short supply when shops were few and far between.

Oumas might know how to prepare an oumaboom bark concoction that young women take for inhibiting fertilisation when that is needed, as Herero women still do.

Oumas are likely to know that a young oumaboom stem can be made into a toothbrush, should haste have caused its omission from a visiting grandchild’s packing.

There are many oumas in rural Africa that know this tree found from South Africa to Ethiopia and Somalia. This one was seen near the Okavango River in Namibia (Mannheimer and Curtis, (Eds.), 2009; Coates Palgrave, 2002).