Home » TYPES » Trees » Anastrabe integerrima
Back to Category Overview
Total images in all categories: 11,538
Total number of hits on all images: 6,621,831 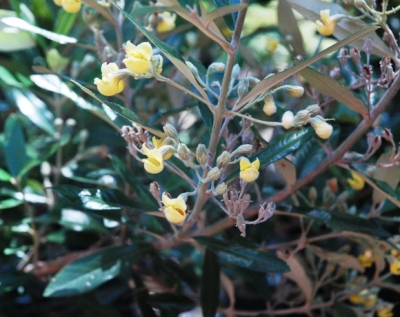 Anastrabe integerrima, commonly the pambati tree, is a shrub or small tree reaching heights from 5 m to 10 m (SA Tree List No. 671).

The flowers grow in axillary or terminal cymes. They are bisexual, their parts occurring in fours or fives. The calyx is bell-shaped, its lobes as long as the corolla tube. The yellow corolla is two-lipped, the upper lip hooded and three-lobed, the lower one shallowly two-lobed. There is a slight red marking in the corolla centre. The flower has four stamens. Flowering happens during spring and summer.

The fruit capsule is ovoid, about 8 mm long. It has two compartments. Fruits are seen on the tree from midsummer to midwinter.

The species is distributed along the coast and midlands of KwaZulu-Natal and the east of the Eastern Cape as far south as Port Elizabeth.

The habitat is coastal bush, inland wooded areas and along forest edges. The species is not considered to be threatened in its habitat early in the twenty first century (Coates Palgrave, 2002; Pooley, 1993; http://redlist.sanbi.org).