Home » TYPES » Trees » Albizia petersiana subsp. evansii
Back to Category Overview
Total images in all categories: 11,544
Total number of hits on all images: 6,627,402 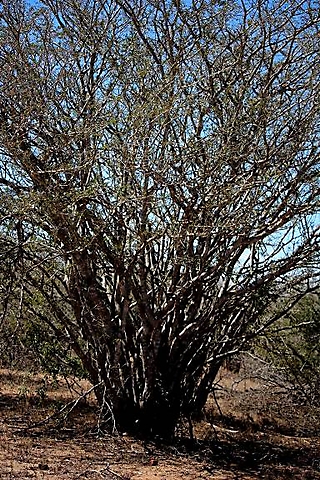 Albizia petersiana subsp. evansii, the many-stemmed false-thorn, branches from the base, ranging from large shrubs of about 4 m tall to big trees around 12 m (SA Tree List No. 153). The inverted cone or V-shape of multiple bare branches angling out is conspicuous on the winter deciduous tree.

The twice-compound or paripinnate leaves lack terminal leaflets. Two to four pairs of pinnae are borne, each bearing two to five pairs of obovate to heart-shaped leaflets, often with pointed tips. The leaflet shape is asymmetrical. Young leaves are coppery red, becoming dark green to olive green above, while paler below when mature and yellow before they fall.

The tiny, rough hairs on particularly the undersurfaces of the leaflets distinguish them from those of A. anthelmintica that has bigger leaflets. The hairy leaf rachis is from 1 cm to 3 cm long, without a hook at its tip, or on the tips of the rachillae (rachises of the pinnae), as are found on A. anthelmintica leaves. The hairy petiole is up to 2 cm long with a gland on top in the middle of the petiole.

Small, about spherical white and red flowerheads grow loosely from hairy buds. The white stamens are joined in a red tube; up to four such tubes form each flowerhead. The flowers appear late in spring with the first leaves.

The subspecies distribution is in KwaZulu-Natal and the eastern, Lowveld part of Mpumalanga and Limpopo; also elsewhere in tropical Africa.

The habitat is open, arid bushveld at lower altitudes in sandy soil. The tree is not considered to be threatened in its habitat early in the twenty first century.

As is the case with so many South African trees, bark and roots are harvested for use in traditional medicine. The leaves and sometimes the young pods are browsed by stock and game (Coates Palgrave, 2002; Schmidt, et al, 2002; Van Wyk and Van Wyk, 1997; Pooley, 1993; http://redlist.sanbi.org).