Home » TYPES » Trees » Albizia forbesii flowers
Back to Category Overview
Total images in all categories: 11,538
Total number of hits on all images: 6,618,056 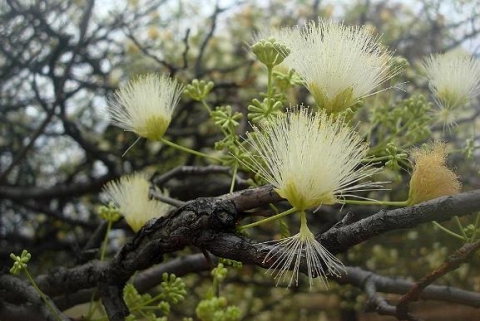 The creamy white flowers of Albizia forbesii grow in clusters of fluffy, nearly hemispherical heads. The most noted parts are the strongly protruding stamens associated with Albizia flowers generally.

Each head is formed by a about six to ten flowers bearing small calyces and petals. In picture the long-stalked clusters of club-shaped buds are lemon cream-green, growing from bare, grey-barked branches. The stamens in the open flowers are about 1,5 cm long, the heads becoming 3 cm wide.

Flowering happens late in spring and early summer with or after the leaves.

The fruit is a broad, russet-brown, woody pod of characteristic flat and oblong shape, attenuating or tapering at the base, rounded to square at the tip. Dark transverse ridges, vein lines, occur upon the surface.