Home » TYPES » Succulents » Larryleachia marlothii
Back to Category Overview
Total images in all categories: 12,081
Total number of hits on all images: 7,379,045 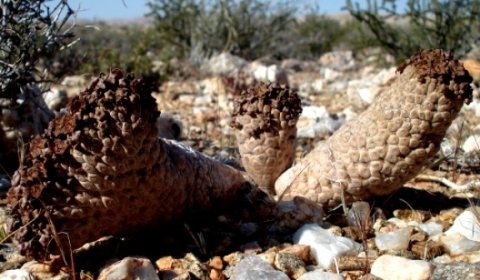 Larryleachia marlothii, previously known as Lavrania marlothii, Trichocaulon keetmanshoopense and T. marlothii as well as several other names at different times, is a stem succulent that branches from the base and reaches heights around 8 cm to 10 cm.

The cylindrical to ovoid stems grow in clumps of up to 30. They may be erect or decumbent, reaching a thickness of about 4 cm. The stem surfaces are covered in small, slightly bulging to flattish tubercles that are four- to six-sided. In the central depression of each tubercle arises a tiny conical protrusion, a vestigial leaf. This is is all that remains of leaves, redundant in the genus, the greenish stems having taken over photosynthetic duties.

The tubercles spiral (or meander) in about 15 semi-regular ribs around the stem. The stems are grey-green when moisture allows growth and production activities, brown in colour when the plant rests.

L. marlothii occurs in Namaqualand in the Northern Cape, in parts of Namibia and in southern Angola. It was first found near Kenhardt and noted as a species by Dr Rudolf Marloth in 1905.

The habitat is arid and semi-arid karoid scrubveld. The species is not considered to be threatened in its habitat early in the twenty first century (White and Sloane, 1937; iSpot; www.llifle.com; http://redlist.sanbi.org).