Home » TYPES » Succulents » Larryleachia perlata
Back to Category Overview
Total images in all categories: 12,091
Total number of hits on all images: 7,393,121 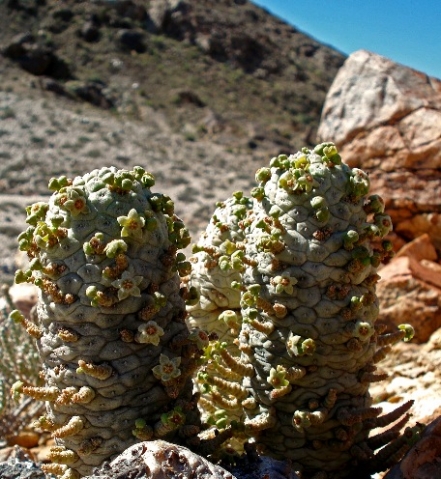 Larryleachia perlata is a large, smooth-skinned succulent forming clumps of usually erect, sometimes reclining stems, branched at the base and becoming up to 30 cm tall.

One should be aware of (at least) some of the earlier names of any plant to access the published information on it. The literature may bewilder as in this case, it presents options like Lavrania perlata (even after 2000), Leachia perlata, Leachiella perlata, Trichocaulon cinereum, T. kubusense, T. perlatum and T. truncatum.

Yet more identity crises may lie in wait as a risk for all the living, in some form or another. It is the growth in science that is at the root of the problem here, so grumbling about progress does not help: the complexities discovered have to be accommodated.

The species distribution is in the far northwest of South Africa, the north-eastern part of the Richtersveld near Cornellskop and Kubus, as well as in southern Namibia across the Gariep.

The habitat is desert or terrain close to it and some succulent Karoo. The plants are found in quartzite patches and on lower rocky slopes in full sunlight. The species is not considered to be threatened in its habitat early in the twenty first century (Williamson, 2010; White and Sloane, 1937; www.redlist.sanbi.org).