Home » TYPES » Succulents » Larryleachia perlata flowers
Back to Category Overview
Total images in all categories: 12,081
Total number of hits on all images: 7,379,098 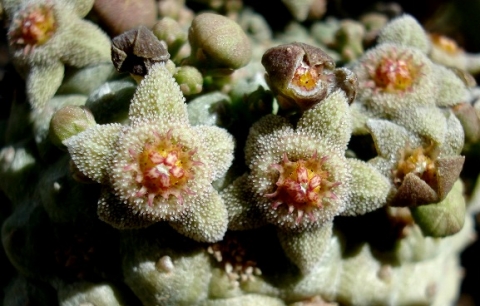 The flowers of Larryleachia perlata arise on 2 mm pedicels from the grooves between stem surface tubercles on upper quarters of the stems.

The flowers have minute sepals, 1 mm long and half as wide, ovate in shape and tapering to acutely pointed tips. A bud is 4 mm wide with a smooth surface.

The open flower spreads to 1 cm, its corolla surface covered in fleshy, conical papillae, both on the five pointed lobes curved back and the raised, ring-shaped annulus. The annulus is 4 mm in diameter, the lobes 3 mm long and not quite as wide.

Pale greenish white with hints near the centre of pink in the photo, the flower colour of L. perlata is quite variable. A purplish plum colour is included among the variations, sometimes mixed into the same stand of plants in nature.

Not really in evidence in the photo, some papillae are said to be irregularly marked with tiny brown-red spots at the base. Such spots are present here though upon the outer corona in the flower centre, characterised by spreading lobes, each with three teeth, the central one shortest.

There is a tiny, similarly coloured inner corona as well, a common feature in flowers of the genera of Apocynaceae, its lobes in this case over the anthers (Williamson, 2010; White and Sloane, 1937).