Home » TYPES » Succulents » Kumara plicatilis
Back to Category Overview
Total images in all categories: 10,346
Total number of hits on all images: 5,047,662 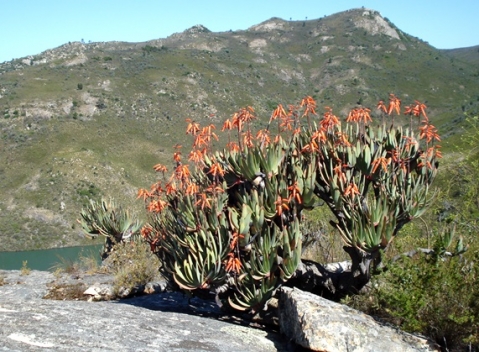 Kumara plicatilis is a tree aloe that spreads its numerous dichotomous (forked) branches, reaching heights around 5 m (SA Tree List No. 29.6). The stems are covered in grey, corky bark.

While most of the other South African tree aloes have recently migrated in that abstract world of botanical classification from the Aloe genus to Aloidendron, Aloe plicatilis went elsewhere. It entered the Kumara genus, earlier a section within Aloe for the fan-leaf aloes. There it was joined by only one other species, viz. A. haemanthifolia, a short, stemless plant.

These two share the feature of leaves arranged in fans, rather than rosettes. Residing in this exotic sounding new generic home, the both of them at least retained their specific names of K. plicatilis and K. haemanthifolia respectively.

To top most of the more daunting plant name stories, one could use the first Latin name of this plant. It was conferred by a Mr. Oldenland, Superintendent of the Dutch East India Company Gardens in Cape Town in 1695, calling it Aloe africana arborescens montana non spinosa folio longissimo, plicatili, flore rubro! The European botanical community certainly had to take note of this arrival on their shores.

The species distribution of K. plicatilis is in the Western Cape from the mountains north of Tulbagh to Stellenbosch and Franschhoek. One of the common names of the plant is Franschhoekaalwyn.

The habitat is rocky fynbos slopes, often steep places where the plants grow in well-drained, acid, sandstone soils. Rainfall is high in this region, the annual (winter) precipitation from 600 mm to 1200 mm. Elevations range between 150 m and 700 m. Winter temperatures on these mountains may drop below freezing, while the summer weather is often humid. The species is not considered to be threatened in its habitat early in the twenty first century (Reynolds, 1974; Van Wyk and Smith, 2003; Jeppe, 1969; www.redlist.sanbi.org).