Home » TYPES » Succulents » Kumara plicatilis leaves
Back to Category Overview
Total images in all categories: 11,506
Total number of hits on all images: 6,503,304 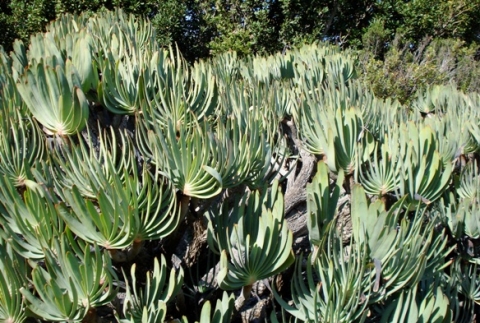 The leaves of Kumara plicatilis grow in two opposing rows at a stem-tip, looking much like an open fan. The common name of fan aloe is no surprise; an Afrikaans name of tongaalwyn (tongue aloe) is also descriptive. These names come from the days when the species still formed part of the Aloe genus; they may well persist.

The plant was botanically called Aloe disticha var. plicatilis at an earlier stage of its history, among several other names in the ongoing struggle for its scientific identity. The specific name, plicatilis, a Latin word meaning pleated or folded, does not quite convey the appearance of these leaves.

The distichous leaf fans are borne erectly; even the leaves positioned near the ends of each fan curve up as if being accosted by an armed robber. There are usually 12 to 16 leaves per fan.

Leaf colour is grey-green, the surfaces of the slightly convex, nearly flat, but rigidly succulent leaves smooth and spineless. Leaf tips may be pinkish, the margins hard from cartilaginous ridges that are sometimes minutely toothed in the upper leaf parts. Leaf dimensions are 30 cm long and 4 cm wide.

A broken leaf surface will exude much clear, watery sap that soon crystallises into a wax-like solid. Old leaves drop off when they dry, leaving the lower stems bare.

This impressive specimen may be viewed in the Harold Porter National Botanical Garden (Reynolds, 1974; Van Wyk and Smith, 2003; Jeppe, 1969).