Home » TYPES » Succulents » Kumara plicatilis flowering in Australia
Back to Category Overview
Total images in all categories: 10,346
Total number of hits on all images: 5,047,784 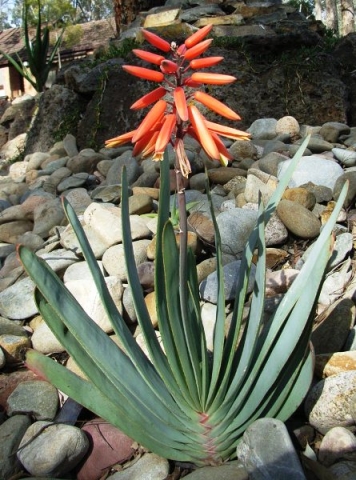 The fleshy, scarlet flowers of Kumara plicatilis grow in a single, unbranched raceme. They are carried on a long, sturdy, erect peduncle emerging from the centre of the leaf fan. The raceme is cylindrical to conical, tapering to the younger flowers at the top. About 30 flowers may be borne per inflorescence, the raceme up to 25 cm long; double that when the peduncle is included.

An open perianth or flower becomes about 5 cm long. Some yellowish colouring is often present at the mouths of the open perianths. Flowering commences late in winter and continues beyond mid-spring.