Home » TYPES » Succulents » Lavrania haagnerae
Back to Category Overview
Total images in all categories: 11,506
Total number of hits on all images: 6,483,463 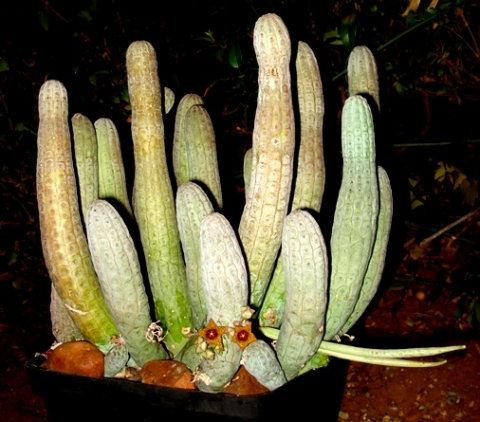 Lavrania haagnerae is a clump-forming stem succulent reaching heights of 30 cm and a stem diameter of 3 cm. The clumps that may multiply to more than 100 erect stems in one plant have fibrous roots and a clear latex.

In picture, the stems are round-tipped, straight, curving or slightly constricted in short, upper sections. Stem colour varies from pale green to grey-green or blue-green. The whitish, horizontal protrusions from the base may be a pair of follicles, the fruit of the plant.

The rectangular to slightly hexagonal stem tubercles are positioned in vertical rows. Each tubercle has a slightly bulging surface with a central depression in which the minute, white, conical leaflet appears insignificant to the plant’s wellbeing. It only becomes up to 1 mm long.

The Lavrania genus may be continuing with the Namibian species L. haagnerae, but without the five or six South African species that were moved to Larryleachia. L. haagnerae was first seen in 1969 in the Khowarib Gorge in northwest Namibia and is only known from a couple of locations.

The habitat is vertical dolomitic cliffs where the vegetation forms only a sparse covering. The plants grow among Aloe dewinteri, favouring crevices and small ledges where the shallow roots access only limited soil. The species may become threatened in its limited distribution due to indiscriminate plant collection (SP Bester (2009): Lavrania haagnerae. Flowering Plants of Africa, vol.61, pp. 98–106; iSpot; www.iucnredlist.org).