Home » TYPES » Succulents » Larryleachia cactiformis
Back to Category Overview
Total images in all categories: 11,506
Total number of hits on all images: 6,515,946 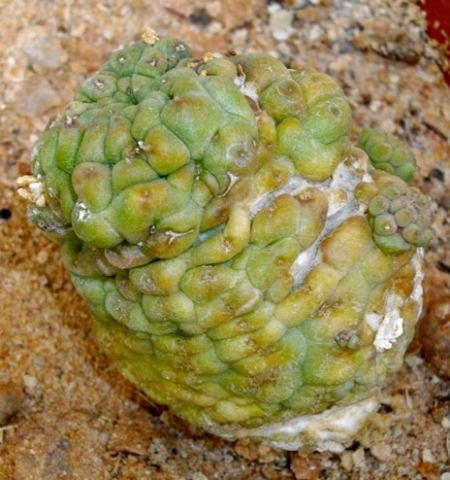 Larryleachia cactiformis is an indigenous South African stem succulent that branches into clumps of up to ten stems. The plant belongs to the Apocynaceae or milkweed family. A stem looks like a small, barrel-shaped cactus of 10 cm to 15 cm in height and 3 cm to 6 cm wide (in its centre).

There are no spines, but bulging, fleshy surface patches are present that leave no space between their four to six unevenly shaped sides. Each tubercle-like patch is tipped with the tiniest, persistent leafy growth. The stem colour is greyish to yellowish green.

The small flowers are many, fleshy and smelly. In Apocynaceae style there is a smaller corona in the flower centre, at the base of the corolla. Flowering happens at the end of summer to mid-autumn.

These plants are found in the Richtersveld, Namaqualand as far south as Garies and in western Bushmanland. The Richtersveld has at least four more Larryleachia species. The habitat is stony north-facing slopes, L. cactiformis usually found at higher altitudes. The species is not considered to be threatened in its habitat early in the twenty first century.