Home » TYPES » Shrubs » Passerina obtusifolia
Back to Category Overview
Total images in all categories: 11,538
Total number of hits on all images: 6,618,483 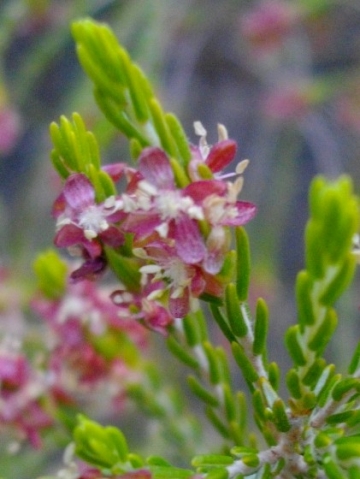 Passerina obtusifolia, one of the gonna or bakkersbos (baker’s bush) shrubs, grows branched stems to 1,5 m. It has a single stem at ground level, not resprouting after fire.

Plants of the Passerina genus were favoured in olden days by bakers of bread who had to stoke fires in outside ovens. Passerina leaves contain a flammable substance ensuring very hot fires and leaving nothing but fine white ashes afterwards. These features earned several members of the genus the common name of bakkersbos.

This is a widespread species with distribution in the Northern Cape Karoo, the Little Karoo and the Eastern Cape to around Humansdorp.

The plants grow in sandy or loam soils on rocky slopes. The species is not threatened early in the twenty first century (Vlok and Schutte-Vlok, 2010; Bond and Goldblatt, 1984; www.redlist.sanbi.org).