Home » TYPES » Shrubs » Passerina paleacea
Back to Category Overview
Total images in all categories: 11,506
Total number of hits on all images: 6,515,809 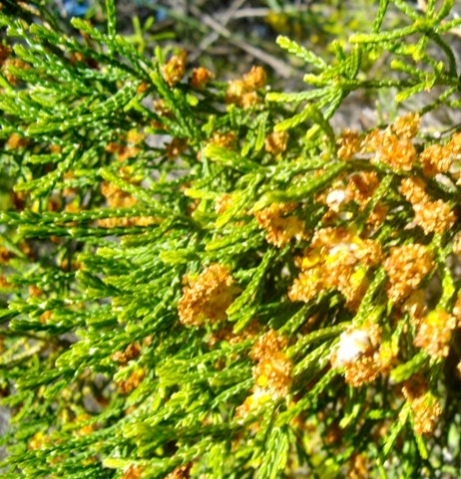 Passerina paleacea is an ericoid shrub or shrublet of about 30 cm, occasionally reaching 1 m. It has small oblong leaves ascending in four ranks up the stems or pressed against it. The flowers are small and green to yellow, growing in short and dense spikes near stem tips and turning brown as they age. The flower tube is about 2 mm in length, comprised of four joined sepals and no petals. The stamens protrude. Flowering time is late winter to midspring.

The plant has a coastal distribution from Saldanha to Agulhas. It is found on sandy flats and lower slopes in fynbos and scrub. This picture was taken near the coast at Vermont (Privett and Lutzeyer, 2010; Bond and Goldblatt, 1984).