Home » TYPES » Shrubs » Oldenburgia paradoxa
Back to Category Overview
Total images in all categories: 11,506
Total number of hits on all images: 6,483,558 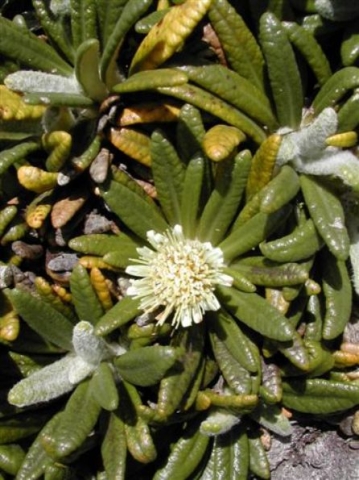 The dark green, alternate leaves are leathery and shiny, elliptic in shape with their margins rolled under. The lower leaf surfaces are white-felted. Only young leaves are covered for a while in white woolly hairs on top as well, as seen on the plant in picture. Leaf midribs are sunken on the upper surfaces, whitish near the leaf base. The lateral veins are sunken to some extent as well, bringing a quilted effect to the leaves. Leaf dimensions are about 5 cm by 1 cm.

The plant bears solitary flowerheads at stem tips, sessile in the leaf rosette centres. The flowerheads are about 5 cm in diameter, cream coloured, sometimes with a tinge of pink or purple. The two-lipped, white ray florets spread their outer lips over the rows of woolly involucral bracts, while the inner lips are small, consisting of two thread-like lobes.

The rays are female, the five-lobed disc florets with curled petals are fertile. Flowering happens in the first half of the year, peaking in April.

The plant lives among sandstone rocks at high altitude (600 m to 1300 m) on the southern mountain ranges of the Western Cape. The strong roots anchor in and feed from rock crevices among the cliffs.

The rocky habitat contributes to survival of fires. Browsers ignore the plant. Remoteness used to offer safety from people, although that species is becoming too numerous. People need to escape from their own crowded habitat to the extent that all species at the ends of the earth are under threat. The global village has put paid to the ends of the earth!

Still, sturdy species features and the other benefits and strengths are holding for now! The species is not considered threatened in its habitat early in the twenty first century (Manning, 2007; Wikipedia; www.plantzafrica.com; www.redlist.sanbi.org).