Home » TYPES » Shrubs » Oftia revoluta unusual flower
Back to Category Overview
Total images in all categories: 11,632
Total number of hits on all images: 6,749,224 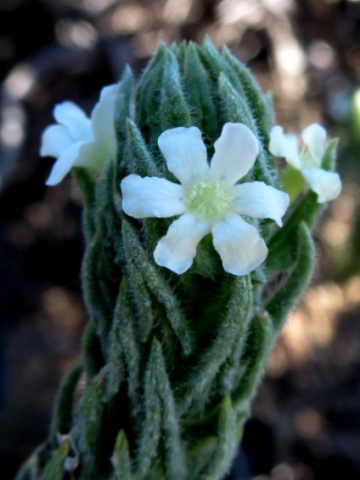 The white flowers of Oftia revoluta grow solitary from leaf axils near stem-tips. Both calyx and corolla usually have five lobes. The one in picture deviates. It has grown six angular corolla lobes to affirm individuality or to show solidarity with monocot friends.

Beneath the spreading white lobes is a corolla tube longer than the lobes. The tube is hairy inside its upper half. The flower has four stamens arising from halfway inside this tube, tipped with anthers that have parallel lobes.

Flowering mainly occurs in spring and early summer. The photo was taken in August. The fruit is a small, fleshy drupe (Eliovson, 1990; Manning, 2009; iNaturalist).