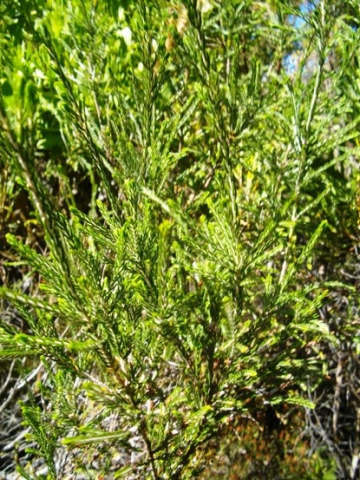 The Passerina genus of ericoid shrublets and shrubs forms part of the Thymelaeaceae or daphne family. Its about 20 species are mostly found in South Africa with a couple of species in the southern African region, notably Zimbabwe and Namibia.

The plants are hairy when young. The leaves are decussate, i.e. positioned in opposite pairs succeeding each other at right angles up the stems. The flowers grow in terminal spikes or heads, subtended by bracts in most cases broader than the leaves.

The plants are wind-pollinated. All of them have eight stamens that hang out of flowers with a four-lobed calyx and no petals; a suitable arrangement for benefiting from the wind.

The type species is Passerina filiformis also known as bakbos (bake bush) or windmakerbos (windbag bush). The bark of some Passerina species was used to make ropes in times past.

The plant in picture is thought to be P. corymbosa that may grow taller than 2 m. It has awl-like leaves that ascend on the stem, far enough apart to show some pale stem. The leaf of P. corymbosa has a hairy groove on its lower surface. Older literature still refers to P. corymbosa as P. vulgaris (Manning, 2007; Leistner, (Ed.), 2000; Bond and Goldblatt, 1984; Riley, 1963).