Home » TYPES » Shrubs » Osmitopsis asteriscoides
Back to Category Overview
Total images in all categories: 11,538
Total number of hits on all images: 6,618,480 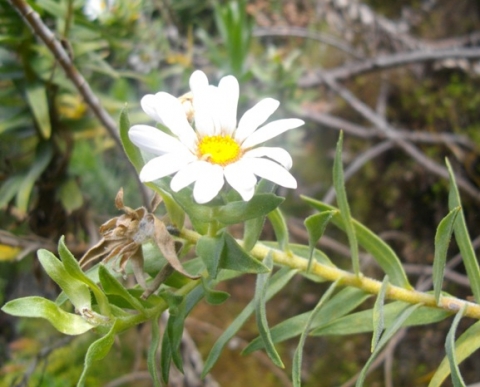 The flowers appear in loose clusters. The ray flowers are oblong with rounded tips. The central disc is yellow. There is no pappus on the fruit. The daisy flowers may appear at almost any time of the year, although autumn and early winter may see no flowers.

The leaves are ascending, alternate, sessile and sometimes felted with white velvety hairs. Leaf shape is lanceolate, tapering to the tip. The leaves are concentrated near stem tips, with older stems on mature plants long and bare.

The species distribution is in the far southwest of the Western Cape. It grows in moist areas such as seeps and marshes. The species is not considered to be threatened in its habitat early in the twenty first century.

The plant has a history of traditional medicinal uses in some local cultures (Manning, 2007; Bond and Goldblatt, 1984; http://redlist.sanbi.org).