Home » TYPES » Shrubs » Montinia caryophyllacea
Back to Category Overview
Total images in all categories: 11,506
Total number of hits on all images: 6,493,814 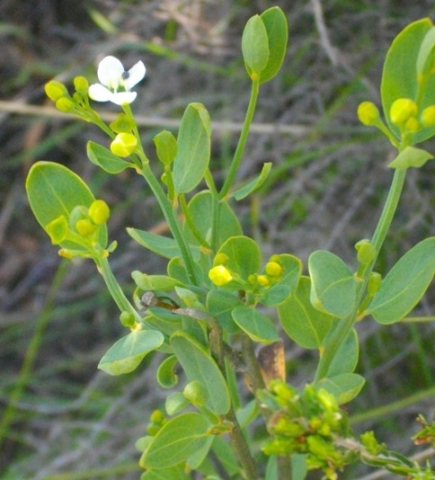 Montinia caryophyllacea has several common names: wild clove bush or in Afrikaans peperbos (pepper bush) or bergklapper (mountain cracker). The first Afrikaans name is derived from the taste of the leaves, the second from the dehiscent seed husks. The growth habit of this shrub is upright to 1,5 m tall.

This is the only species in its monotypic genus. This plant does not seem to have cultural uses, at least among people. Among pollinators it is a different matter.

The leaves are bluish green or grey-green, leathery, elliptical and deciduous. Depending on rainfall they may be sparsely distributed on the plant and quite small on mature plants.

The small, four-petalled white flowers are unisexual, the sexes growing on separate bushes. The female flower has a long green cylindrical calyx tube with a green triangular stigma. They grow solitary or in pairs, while the slightly smaller male flowers occur in clusters. The blooming season is autumn to spring. The erect dry seed pods break open in halves to release the seeds and remain conspicuously on the plant.

The large species distribution is in the south-western regions of southern Africa, from Angola to the Cape Peninsula and eastwards to the Eastern Cape. The plant in picture was found in the mountain north of Greyton in September.

The habitat is dry sandstone and granite slopes. The species is not considered to be threatened in its habitat early in the twenty first century (Manning, 2007; www.fernkloof.com; http://titanarum.uconn.edu; http://redlist.sanbi.org).