Home » TYPES » Shrubs » Montinia caryophyllacea stems
Back to Category Overview
Total images in all categories: 11,921
Total number of hits on all images: 7,168,375 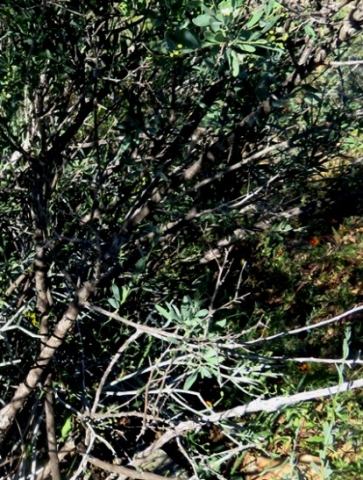 The woody stems of a large Montinia caryophyllacea shrub remind that the plant has earned a number on the SA Tree List (No. 137.4).

In the south of South Africa the plant only reaches heights of about 1,5 m, as reported by Vlok and Schutte-Vlok (2015). They believe the plants of the northwest (Namaqualand and Namibia) to be a different species. The northerly plants become up to 3 m tall according to Mannheimer and Curtis, (Eds., 2009) that inform about Namibian trees and shrubs.

The wood is very hard. These stems were used by the San for digging. The plant is sometimes called wild clovebush. It is said to attract cats. The crushed leaves exude a pungent, acrid scent. The leaf sap is milky (Vlok and Schutte-Vlok, 2015; Mannheimer and Curtis, (Eds.), 2009; Le Roux, et al, 2005; Coates Palgrave, 2002; iNaturalist).