Home » TYPES » Shrubs » Microdon polygaloides inflorescence
Back to Category Overview
Total images in all categories: 11,506
Total number of hits on all images: 6,514,542 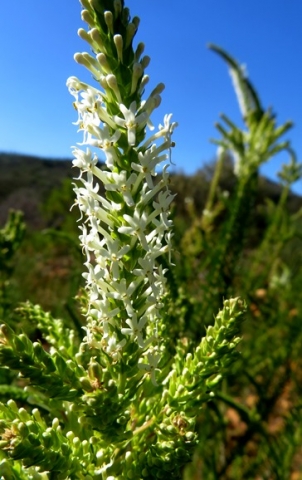 The inflorescence of Microdon polygaloides consists of a densely flowered spike or branched spikes at a stem-tip. The small flowers are cream-coloured or white. Flowering happens during spring and early summer.

Younger spike branches are greener than the white primary one in picture, the buds not dominant over the bracts yet and not as white as the open flowers. The curving of corolla lobes, mainly the lowermost one of each flower, gives a spidery appearance to the open flowers (Bean and Johns, 2005; Bond and Goldblatt, 1984; iNaturalist).