Home » TYPES » Shrubs » Montinia caryophyllacea male flower
Back to Category Overview
Total images in all categories: 11,923
Total number of hits on all images: 7,173,496 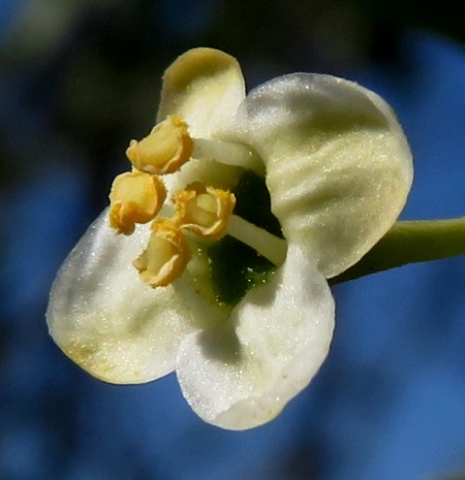 The male Montinia caryophyllacea flower seen at close quarters reveals four white and partly pale yellowish petal lobes. The lobes are not quite flat and even, their margins curving up in parts, as well as some undulations present on the fleshy surfaces where tiny cells glisten.

The four stamens emerge from the corolla wall inside the mouth, where the petal lobes meet and overlap slightly. The stamens are positioned at the perimeter of the glossy, dark green disc that fills the central cup, slightly lower than the petal lobes.

The fleshy white filaments are short and stubby, not quite cylindrical as they taper to the top, similar to the columns of most ancient Greek temples. The anthers face outward, away from the axis or flower centre. They have ragged yellow margins around paired white oblongs (Coates Palgrave, 2002; Leistner, (Ed.), 2000).