Home » TYPES » Shrubs » Montinia caryophyllacea green fruit
Back to Category Overview
Total images in all categories: 11,506
Total number of hits on all images: 6,491,952 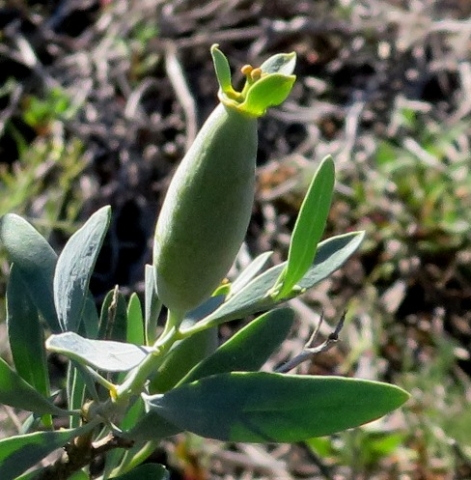 This young Montinia caryophyllacea fruit bears three leaf-like bracts, small and pointed, around the persisting style and stigma of the otherwise lost flower. The result is like a crown on an elongated head, reminding of some Euphorbia cyathia. The shape of a mortar bomb also comes to mind.

The capsule is about 2 cm long, thinly woody and later also somewhat papery. The ripe capsule will eventually split into two parts. Some old capsules may be visible on the bushes at most times during the year, their shape an aid to identification (Vlok and Schutte-Vlok, 2015; Mannheimer and Curtis, (Eds.), 2009; Le Roux, et al, 2005; Coates Palgrave, 2002; iNaturalist).