Home » TYPES » Shrubs » Microdon polygaloides buds and flowers
Back to Category Overview
Total images in all categories: 12,081
Total number of hits on all images: 7,379,161 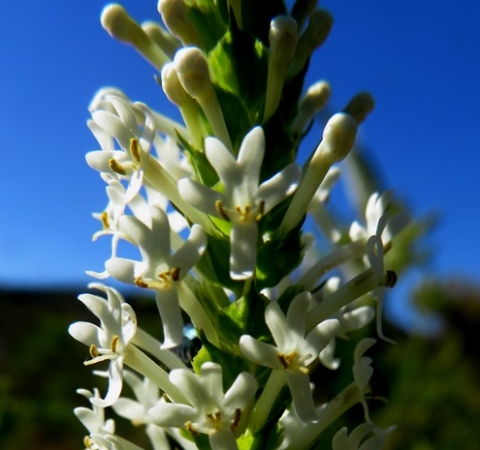 In this section of a Microdon polygaloides flower spike some white club-shaped buds at the top still await their moment of unfolding the corolla. The photo was taken in August.

The white flowers lower down display dull yellow anthers in and beyond the corolla mouths, as well as exserted styles with tiny stigmas at their tips. Pointed green bracts subtend the flowers.

The upper lobes of the upper lip are joined in their lower halves, their rounded tips veering sideways. The lower pair of lateral lobes ascend, are shorter than the single lobe of the lower lip that strongly curves forward in its lower part (Bean and Johns, 2005; Bond and Goldblatt, 1984; iNaturalist).