Home » TYPES » Shrubs » Microdon polygaloides
Back to Category Overview
Total images in all categories: 12,081
Total number of hits on all images: 7,379,088 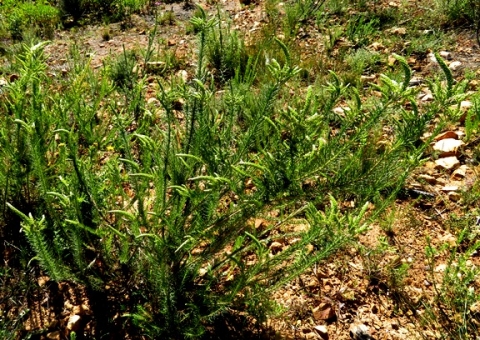 Microdon polygaloides, previously known as M. cylindricus and earlier forming part of the Selago genus, is a leafy, heath-like shrublet branching at the base and not higher up, reaching heights from 30 cm to 90 cm. Its deep green leaves are needle-like, spiralling around the stems.

Microdon species are known in Afrikaans as katstertbosse (cat’s tail bushes). The genus comprises seven species, six of which are found in the fynbos.

This species occurs in the Western Cape, from the Gifberg to Stellenbosch and Montagu. The photo was taken on the Piketberg Mountain.

The habitat is fynbos sandstone slopes. The plant is not considered to be threatened in its habitat early in the twenty first century (Bean and Johns, 2005; Bond and Goldblatt, 1984; iNaturalist; http://redlist.sanbi.org).