Home » TYPES » Shrubs » Microdon polygaloides flowers
Back to Category Overview
Total images in all categories: 11,506
Total number of hits on all images: 6,514,427 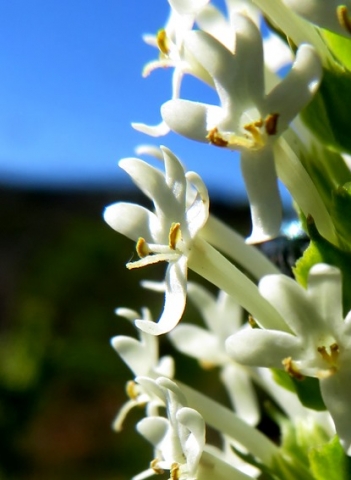 The flower of Microdon polygaloides is long-tubed, two-lipped and five-lobed. The thin tubes ascend in the spike, the upper lip four-lobed, the lower one a single lobe. The lobes are oblong with rounded tips that curve in, not always in the upper lip.

One pair of the four stamens as well as the stigma are well exserted from the small corolla mouth. The other pair of stamens with smaller anthers, possibly growing on shorter filaments if not emerging from a lower base in the tube, are just visible in the mouth.

The ovary of a Microdon flower has one chamber, a second one remains undeveloped (Manning, 2007; Bean and Johns, 2005; Bond and Goldblatt, 1984; iNaturalist).