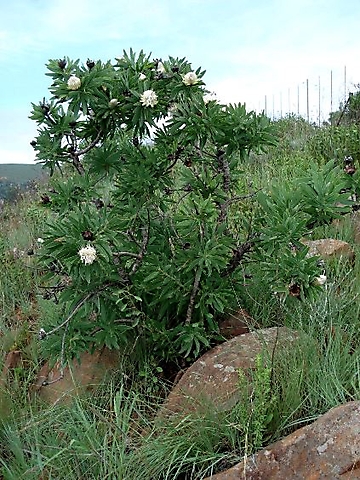 Protea gaguedi, the African white sugarbush or African protea and previously P. abyssinica, is a small tree growing several stems that branch from low down. It commonly reaches 3 m to 4 m in height, rarely 10 m but that is unlikely in South Africa (SA Tree List No. 89).

The woody rootstock and thick, corky bark allow resprouting after fire. Old bark is gnarled and flaky, pale brown or grey. Only young stems and leaves are hairy; they may also both be reddish.

The species distribution is in the northwest of South Africa, in the provinces north of the Vaal River and KwaZulu-Natal. This is the southern extreme of the distribution, the plants prevalent in tropical Africa from Mozambique and Angola to Ethiopia, where the common name is gaguedi, the origin of the specific name. This is the most widely distributed of all Protea species.

The plant grows in warm regions, often in rocky, sour grassland like on the Magaliesberg, but overall it is found in various habitats in soils derived from granite, dolomite and more. In South Africa P. gaguedi is particularly notable where lowveld and highveld meet. The species is not considered to be threatened in its habitat early in the twenty first century.