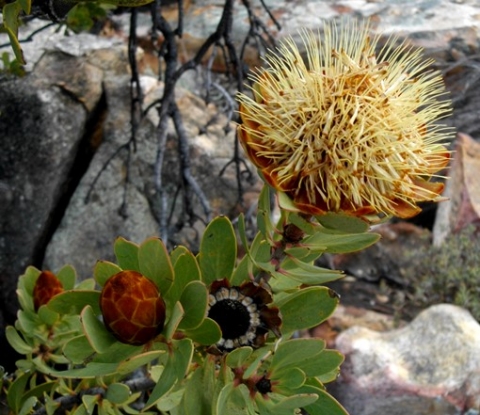 The Protea glabra plant in picture presents a tiny, dark, failed bud at a stem-tip, a couple of large, maturing, brown buds ready to open soon, an old open flowerhead in which seeds are forming, as well as a black receptacle or flowerhead base from which all inner floral material has already disappeared.

These are all stages in the flower and seed production sequence of the plant. Every one of them has had a different starting date. The commencement date of every flowerhead is associated with constructive or constrictive growing conditions, the vicissitudes of the weather that either allow normal proceedings or inhibit further development when times are too hard.

Almost every branch tip (or many of them) will produce a flowerhead when conditions allow, while within each successful flowerhead a large number of seeds are produced. This abundance of effort increases the odds of growing new plants in order to offset all the many mishaps that may befall the seeds once dispersed into the environment. Instead of leaving things to chance nature capitalises on chance by never letting a chance go by unused.