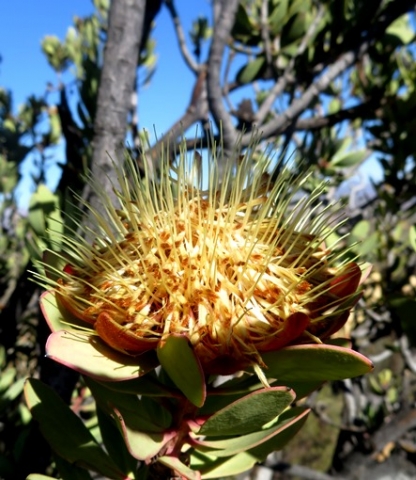 When flowering is about done in a Protea glabra flowerhead, the chestnut brown tips of the perianth segments can still be recognised where they lie collapsed in an unkempt tangle at the base of the involucral cup. In contrast, the straight, erect and thin styles form a sparse, rounded and cream-coloured brush above them.

The rounded shape formed by the spreading style tips is caused by the cone-shape of the receptacle base still invisible below them. Most proteas have a flat receptacle as the flowerhead base, only revealed once flower remains and seeds are gone. In the case of P. glabra this receptacle has a steep cone-shape.

This species discards flowerhead contents as soon as the seeds are ripe, flaunting its dark, pockmarked receptacle like a medal (Rourke, 1980; Manning, 2007; Coates Palgrave, 2002; iNaturalist).