Protea eximia, the old and the new 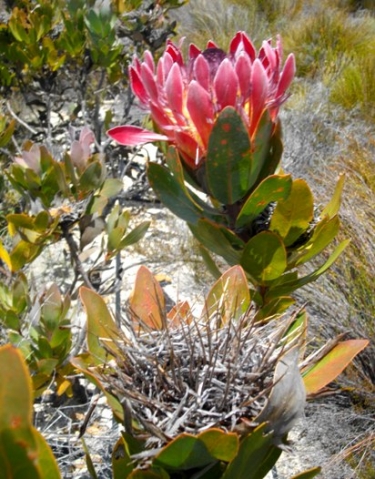 Protea eximia flowerheads of two consecutive seasons are juxtaposed on two adjacent stem tips in this picture, both still enveloped by the plant’s broad leaves. While the young flowerhead is going through the flowering cycle at the time of the photo, the old one in the foreground is dry and has lost its tall, inner ring of involucral bracts. It still has sufficient bracts in position lower down though, for containing and protecting the seeds that have been produced at this stage.

The seeds, hairy brown nutlets attached to the persisting styles, are here still well covered under the dry mass of old styles and perianths. The seeds are retained for a long time before being released on the wind for dispersal later.

The pale orange leaf margins in this picture are between the white and red colour forms of leaf margins that are commonly seen. Leaf colour in P. eximia is also variable, greener in moister habitats, while tending to be glaucous or blue-tinted when it grows in drier climates. This plant was found on a dry slope in the Kogelberg in December (Manning, 2007; Rourke, 1980).