Home » GENERA P » Protea » Protea eximia with bright involucre
Back to Category Overview
Total images in all categories: 12,087
Total number of hits on all images: 7,392,988 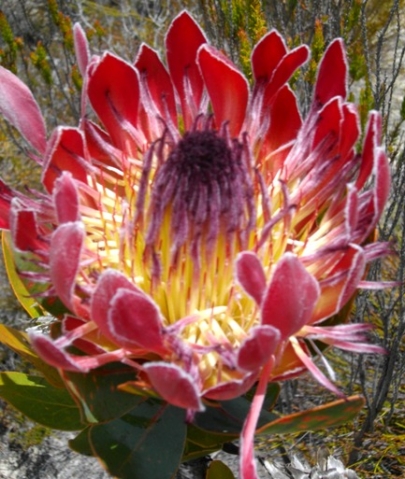 These brightly coloured inner involucral bracts of the Protea eximia flowerhead display their spoon-like shapes and a fine covering of white hairs, visible on their outer surfaces and margins. The bracts also seem to be more densely represented here than on some other flowerhead specimens.

Around the inner dark and woolly cluster of closed florets still present in the centre, the already opened perianths near the perimeter are represented by the styles, scattered among the detritus of their own perianth segments. These discarded perianth segments that earlier enclosed the styles and contain the pollen inside their tips, have fallen away in various directions.  In the photo some of them even protrude beyond the narrow stems of the upper bracts to the outside of the flowerhead. This tends to give the open flowerhead of P. eximia a somewhat unkempt appearance (Manning, 2007).