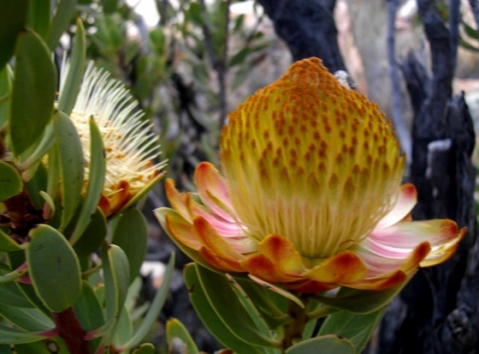 The young Protea glabra flowerhead contradicts the common belief that this plant is not pretty. As in the ugly duckling story, the moment arrives when these blooms adorn the arid upcountry landscape, charming the most committed aficionado of moist, lush fynbos proteas of the south. The miracle of flowers in unlikely settings add to the argument.

P. glabra is adapted to its rugged land where life demands commonly leave harsh markings upon its plant citizens, but not on the few festive days. Then the flowerheads transform it all and impress.

The perianth tips in picture are semi-scattered shapes, small and chestnut brown on a bed of delicately soft, yellowish woolliness. Lower down, the perianths are pale where the styles are already bursting through the seams of their segments in preparation for their imminent escape.

Although the individual florets, the perianths, are still closed, the involucre is already spread widely. Even its inner bracts are bent below the horizontal near their base, while curving in towards their tips, forming a shallow bowl around the mass of florets. The insides of these bracts in picture are pale pink and white, the outside surfaces at their tips a redder brown than the perianth tips above them.

Peeping out from behind the blue-green leaves on the left, the sparse brush of straight white styles shows what the mature flowering stage of P. glabra looks like (Rourke, 1980; Manning, 2007; Coates Palgrave, 2002; iNaturalist).