Home » GENERA P » Protea » Protea eximia fruithead
Back to Category Overview
Total images in all categories: 11,506
Total number of hits on all images: 6,494,365 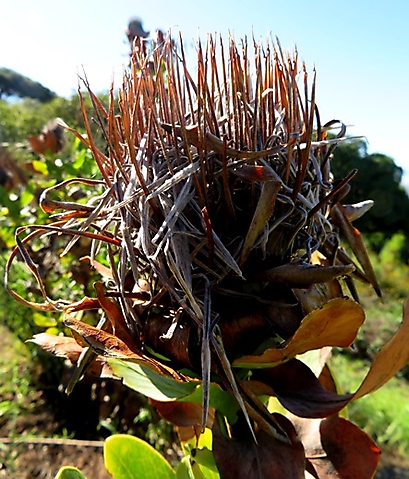 The fruithead of Protea eximia is about holding treasure, no longer about looks. Earlier floral colouring served the purpose of alerting pollinators, not pleasing aesthetes.

Once pollination is over and seeds have developed, the appearance of the residual head is of no further consequence and receives no further maintenance sustenance. It is now a temporary storage facility for the nearly ripe and dry seeds to be sent on uncontrolled aerial trips to new lives in the great wherever, preferably out of sight of the parent plant.

The erect, needle-like parts are the styles down which the pollen grains had grown, each to meet its ovule match in an ovary. The collapsed parts are leftovers of the perianth segments that covered the style in the bud phase and contributed the pollen. Below all this detritus the brown-haired, nut-like fruits are waiting patiently for their one-way trip, like passengers at a train or bus station, but lacking tickets and predetermined destinations.

A flowering plant has as much affiliation with its departing seeds as a human being has with its offspring of the tenth, hundredth or thousandth generation to come; in other words, zero. And all that following the great effort, life sacrifices and meaningful commitment involved in producing fruit or baby in the first place (Coates Palgrave, 2002; Leistner, (Ed.), 2000; Rourke, 1980).