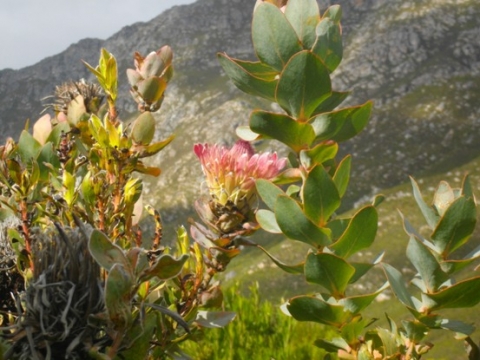 Protea eximia, the broad-leaved protea or broad-leaved sugarbush grows from a single stem into a large, erect shrub or small tree of up to 5 m (SA Tree List No. 88.3). That is if no fire finds it over the few decades of its life as it does not resprout.

The stem is brownish grey, sometimes corky or flaky and covered with a bloom when mature; young stems hairy. Stems sometimes extend singly from the dense though unevenly branched and untidy looking central part of the plant.

The leaves are oval or elliptic, hairless, leathery and lobed at the base. They are sessile, i.e. stalkless or without a petiole. The leaf colour is blue-green, greyish or silvery green, the midrib yellowish.

The species distribution is along the southerly mountain ranges from the Western Cape around Caledon through the Langeberge and the Swartberge to the mountains at Van Stadens in the Eastern Cape. The photo was taken in the Garcia Pass near Riversdale.

The habitat is fynbos on sandstone slopes, ranging from semi-arid, montane parts to moister regions. The species is not considered to be threatened in its habitat early in the twenty first century (Vlok and Schutte-Vlok, 2010; Manning, 2009; Coates Palgrave, 2002; Rourke, 1980; Eliovson, 1973; www.plantzafrica.com; http://redlist.sanbi.org).