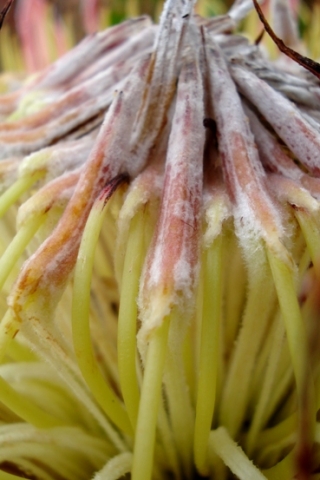 Domestic struggles take so many forms in the land of the living: These “adolescent” (female) styles in a Protea cynaroides flowerhead have had enough of being boxed in by male domination, encapsulated inside their perianths. They are straining their powerful cylindrical bodies for escaping from the stranglehold.

Quite prepared and determined to follow their natural destiny, they compromise their femininity by taking on some male work in return for standing tall in the sun: They proudly bear the survival necessity, the pollen, on their sticky heads, the stigmas.

There is full acceptance that this moment is not yet for them as women, their rebellion constructive, within the plan for the future of the species: They hold the pollen available for transportation to others while remaining virginal and patiently subservient, awaiting their big moment.

No visitor of whatever species will get past them to the enticing juice, stored below inside the flowerhead base without touching them. Touch being such a ubiquitous wonder of procreation!

Thus the pollen distribution service providers, mainly birds and insects lured by home made liquor called nectar, can unwittingly relieve the pollen presenters of their sticky loads that inspired this complex logistics arrangement.

Once the everyday magic of this postal service has delivered, the styles revert to the feminine affair of becoming receptive to pollen attracted from some place else in the big wide world, just not from home. In a life-changing moment many of them will be blessed by an itinerant "holy one" of dubious appearance, but definitely secular in nature, for the crowning of the style head by a tiny grain, and fulfilment of a successful life mission.