Home » GENERA P » Protea » Protea cynaroides, the mathematician
Back to Category Overview
Total images in all categories: 11,544
Total number of hits on all images: 6,626,002 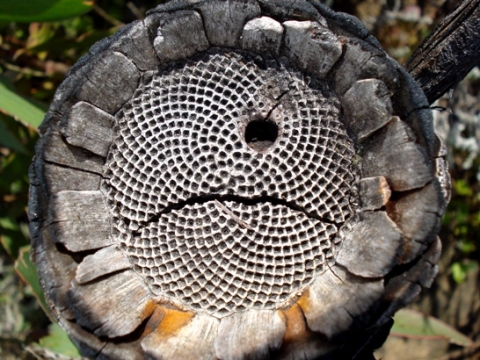 Regular patterns occurring in plant shapes can often be mathematically represented by a whole number series in which every adjacent number pair added give the next number.

This neat number and geometric phenomenon was first described in Europe by the twelfth century Italian mathematician Fibonacci, Leonardo of Pisa or son of Bonacci, who was educated by the Moors in Algeria. The superior Hindu-Arab number system was soon after his work adopted in Europe, replacing the Roman numerals.

In the photo, several clockwise and anticlockwise spirals arise from around the centre in the pattern of holes in this partly burnt base of a Protea cynaroides flowerhead, its involucral receptacle.

Evidence of these patterns abounds in nature, to the extent that they have been described as nature’s numbering system. Seen in honeycomb, the scales on a pineapple, floret arrangement in many kinds of flowerheads, seashells shapes and bracts of pinecones… everywhere one looks growth patterns of living things can be described in Fibonacci number terms (Wikipedia; www.goldennumber.net).