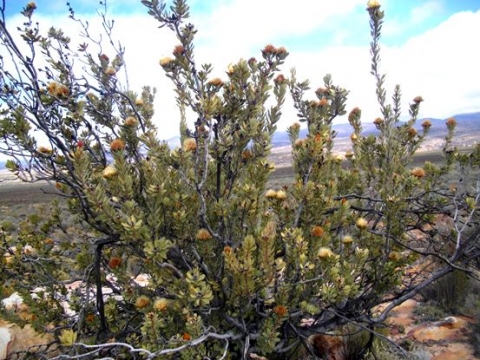 Protea glabra, the chestnut sugarbush or Clanwilliam sugarbush and in Afrikaans kaiingsuikerbos (greaves or crackling sugar bush), is a multi-stemmed shrub or tree that may reach 5 m in height (SA Tree List No. 89.1).

No single stem develops proper trunk proportions. A multitude of basal branches of similar diameter forms the mature spreading bush, usually a stout woody base with branches fairly erect. Old stems become leafless, reflecting the demands made by the arid habitat. The bark is smooth and grey, marks remaining for some time where leaves and small twigs had dropped off.

The species distribution is in the northwest of the Western Cape from Nieuwoudtville to the Gifberg and Cederberg to the eastern Koue Bokkeveld.

The habitat is arid and rocky, montane sandstone slopes, outcrops and plateaus, often among boulders, in a region receiving an average winter rainfall of 250 mm per annum. Temperature extremes and shallow soil also contribute to the challenges this plant and its neighbours face. The species is not considered to be threatened in its habitat early in the twenty first century.

These plants last long compared to many proteas found in easier climatic conditions. Old P. glabra bushes among the rocks also spreading to 5 m in diameter but take their time doing so.

The species has features suggesting that it is a relic of times when many more Protea species, now extinct, must have lived beside them in southern Africa or its predecessor(s) in development of the continent (Rourke, 1980; Manning, 2007; Coates Palgrave, 2002; iNaturalist; http://redlist.sanbi.org).