Home » PARKS AND GARDENS » Mapungubwe National Park » Say Hi!
Back to Category Overview
Total images in all categories: 12,058
Total number of hits on all images: 7,353,482 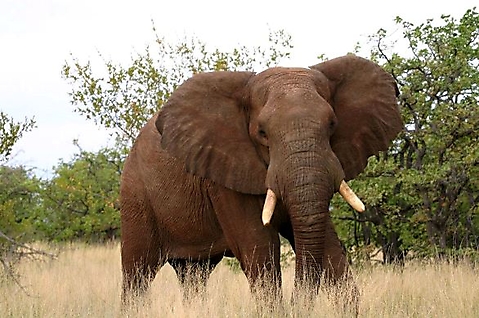 Magnificent as it is, most people don’t want to meet a big elephant on foot for a close-up photo. Elephants are said to kill about 500 people per annum, according to a National Geographic film. Even people in vehicles can be in trouble if an elephant gets upset.

Then there are those who understand how and when to stand their ground and all goes well, the parties sensing mutual recognition and respect. There are or may also be elephant whisperers like horse whisperers that can interact with elephants confidently, almost as if they too were people, but this is for the few patient, courageous and talented ones.

Communicating with an intelligent animal does not involve taming it, but some learning curve for establishing the interspecies connection is involved, a skill still poorly understood. Achieving intimacy with elephants is for the few who live close enough to them in the wild, behaving in accordance with understanding gained by observation and interactive exploration. Caring for circus and zoo elephants is something different, although related, lesser skills are involved.

As a social animal, the trunk is sometimes used in touching other elephants in a kind of body language, maybe like hugging between people; a habit much reduced by Covid-19. Young elephants interact socially using their trunks from about 6 months old. There are around thirty sounds made by elephants that may denote some communicated meaning.

Communication occurs via trunk and mouth, the fused nose and upper lip. It happens by more than use of the tongue, a fleshy organ of around 12 kg that can’t be stuck out and is also used in swallowing.

Swallowing happens much, as elephants eat for more than eighteen hours per day, single-stomach animals that are not ruminants. Food passes through quickly, the stomach being relatively small for the animal’s size. Up to 150 kg of dung can be excreted by a grown elephant per 24 hours.

Browsing and tree mutilation become problems when herd populations grow in areas too restricted for the animals to roam sufficiently (Riëtte, 2016).