Home » PARKS AND GARDENS » Mapungubwe National Park » Gemsbok
Back to Category Overview
Total images in all categories: 12,058
Total number of hits on all images: 7,353,421 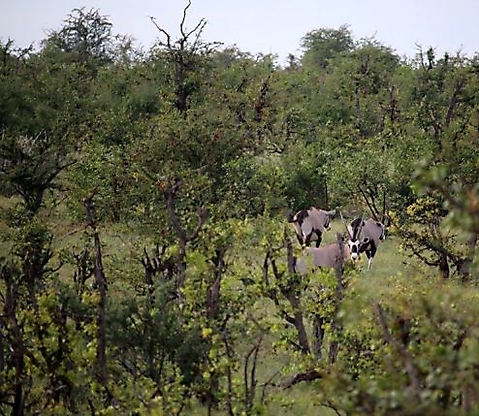 Previous
Image 4 of 17
Next

The gemsbok, South African oryx or Oryx gazella lives in the arid parts of southwestern Africa.

Unrelated to the European chamois, gems or Gämse of montane southern Europe, both animals have black and white facial markings. The European animal is goat-like with short, hooked horns, the gemsbok a large antelope with long, straight, ridged horns, related to the sable antelope and the roan antelope.

Gemsbok bulls weigh about 240 kg, the cows 210 kg; their shoulder height is about 1,2 m. The animals live to about 19 years unless eaten earlier. The cow’s horns are straighter, sometimes skew, while big bull heavier horns are carried flat over the back, nose in the air. He will defecate while crouching, causing the dung pellets to be more concentrated for its scent to linger in asserting his territorial claim, an issue of no concern to the cows, although they maintain their own separate hierarchy.

The gemsbok coat is pale brown-grey or tan with a blackish stripe from the chin, splitting around the pale patch on the stomach and continuing to the top parts of the back legs. The horse-like tail is long and black.

The yellow-brown, hornless calf assumes adult colouring around five months old. It weighs up to 15 kg at birth, hidden by the mother between suckling visits for up to four weeks. Animals are physically mature by two years, but the bulls are socially prepared for mating rights only by five. The female may calve by 30 months, the gestation lasting around 264 days.

The gemsbok lives in open, hot and arid regions, even among dunes of the Kalahari and Namib, but also in savanna and on rocky mountain slopes. It mainly grazes. Grass of any length will do, while leaves, fruit, succulents, roots and tubers balance the diet as needs dictate and opportunities allow. When dry grass runs out along the "streets" between the dunes, gemsbok may be spotted on their knees, targeting the less accessible plant parts.

Still, a gemsbok eats less than animals of comparable size due to lower metabolism, its needs adapted to desert conditions. Low moisture intake is matched by less sweating and a higher body temperature. Its blood is cooled by an unusual network of fine veins in the nose and near the brain, preventing brain damage from heat.

They eat the desert tsammas (Citrullus lanatus) and various tubers for moisture when water is not found, coping thus for long periods. In drought they will graze far away from water sources in areas vacated by other species dependent on drinking water.

Gemsbok herds will split up in drought. The herd travels in single file, spreading to graze. Bulls are not as territorial as in the case of several other antelope species, finding food with the herd (Riëtte, 2016; Wikipedia).