Home » PARKS AND GARDENS » Mapungubwe National Park » Pied kingfisher
Back to Category Overview
Total images in all categories: 12,058
Total number of hits on all images: 7,353,526 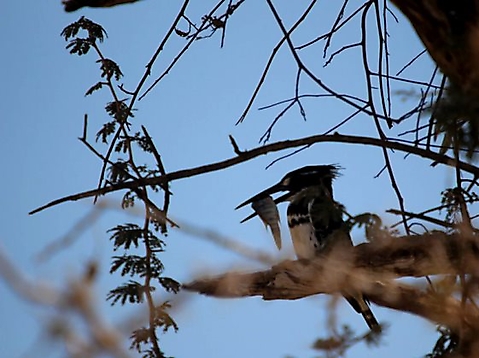 Previous
Image 9 of 17
Next

If it’s a kingfisher it catches fish, right? Not all kingfishers do. Some eat insects and other animals exclusively like the pygmy kingfisher, or predominantly like the mangrove kingfisher and the woodland kingfisher.

This pied kingfisher, scientifically known as Ceryle rudis, is holding proof of its fishing skills in a proud camera moment before the big swallow or gulp. The markings on its throat indicate that this bird is male.

A pied kingfisher is capable of catching fish weighing up to 15 g. Photogenic when perched on a branch with its catch, better pictures show it hovering over water with fluttering wings in anticipation, or in the act of catching.

The wife catches her own food, but both feed their young. The nest is usually lined with regurgitated fish bones and scales. Apart from fish, a pied kingfisher also eats crustaceans and insects.

It breeds in South Africa from late winter to the end of spring. The nest is a burrow in the earth or a sandbank, the chamber up to 2 m from the entrance. From two to six white eggs are laid. The parents are sometimes assisted by other adults of the clan in bringing food to the young.

These birds are at home throughout South Africa, apart from parts of the Northern Cape and North West. Feeding from and around water, it is found at rivers, lakes and dams, but also around estuaries and the sea coastline (Maclean, 1993).