Home » PARKS AND GARDENS » Mapungubwe National Park » Redheaded weaver
Back to Category Overview
Total images in all categories: 12,058
Total number of hits on all images: 7,353,441 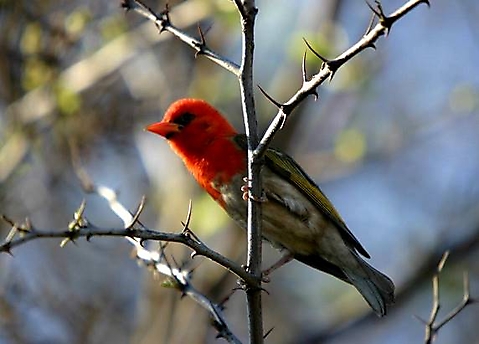 The male redheaded weaver, scientifically known as Anaplectes rubriceps, is scarlet on its head, breast and upper back during the breeding season, making it easy to identify.

The female, the immature bird and the non-breeding male are all dull orange in the parts scarlet here. The black mask over or next to the eyes is variable, sometimes absent. The bill loses colour or becomes pinkish in non-breeding attire. Anaplectes is a monotypic genus.

The birds occur widespread in Sub-Sahara Africa. In South Africa it is only found in the far north, in parts of Limpopo, Mpumalanga, North West and KwaZulu-Natal. It is occasionally seen in the Magaliesberg in Gauteng where it may also nest.

In some parts this bird is only a summer breeder, not a permanent resident. Its habitat is woodland, bushveld and savanna, usually near water.

The food is insects, sometimes hawking them in the air. It also catches spiders such as social spiders and eats fruit and seeds, searching for food among leaves some distance from the ground.

The male is the main nest builder, weaving it from sticks, leaf midribs, tendrils and lining it with grass. Nests hang from branches (or manmade structures), sometimes a number of nests in one tree. There is a tunnel entrance on the side pointing down. The nest is so durable, it may be used later by other birds. It is not as neatly woven as those of some other weavers though.

Monogamous breeding pairs occur, while males may live with a few females. Two or three pale blue eggs are hatched in nearly two weeks by both parents; more by the female as the male may have other commitments.

The branch in picture is Ziziphus mucronata, showing the typical straight and hooked spine pairs. Twig zigzagging between nodes only occurs on the thin, young branchlets (Maclean, 1993; http://weavers.adu.org.za).