Home » PARKS AND GARDENS » Mapungubwe National Park » Rock ridge
Back to Category Overview
Total images in all categories: 12,058
Total number of hits on all images: 7,353,519 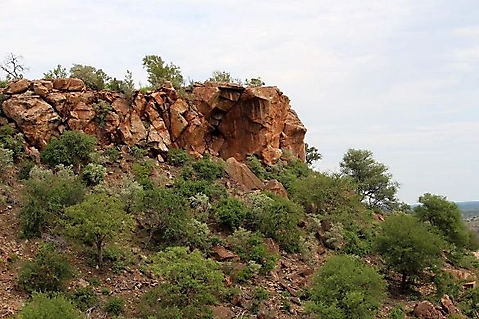 Rocky outcrops and ridges defy the covering of soil and vegetation that prevails in landscapes generally. These stony landmarks attract the eye, sometimes meriting closer inspection as spots of particular interest. Such places were after all important as shelter for certain echelons of human ancestry. A recessive rock attraction gene may still lurk in some of us?

Plants and animals still capitalise in a big way on the special conditions and living resources offered here; even if that only means feasting on some fellow inhabitants.

Erosion continually removes small bits of rock and sand, transforming land surface slowly but significantly. Water, wind and temperature fluctuations play big roles in this. The earth surface also changes from the ways extant life forms occupy and use it.

Rocky outcrops often remain as the oldest features of a particular spot, dominant in defining its identity, like when people share information about a route. In some places tectonic uplift may occur, pushing rock up where land may have been flat before. The scree of rocks tumbled down from ridges like the one in picture accumulates lower down where the slope levels and gravity fails to support further rock rolling.

As erosion takes its time and toll over rock weathering, the few sudden changes occasionally spotted during storms become forgotten as an omissible continual process. This renders most of the landscape stable in our minds and in our time, unless we mess with it ourselves. The earth appearing unchanging to people conflicts with warnings from scientists who measure and compare.

Maybe scale features will be the salvation of the human reputation: We may end up having been here for too short an interval in earth existence to be remembered as well as a durable group like the dinosaurs.

Our traces surviving for a few million years will be gone, their impact after a few million more. The damage we do then negligible because in the timeframe of all life on earth the human sojourn may be irrelevant, even before considering the bigger scheme of things, should life on earth be among the big things.