Home » PARKS AND GARDENS » Mapungubwe National Park » Dassie scout
Back to Category Overview
Total images in all categories: 12,058
Total number of hits on all images: 7,353,530 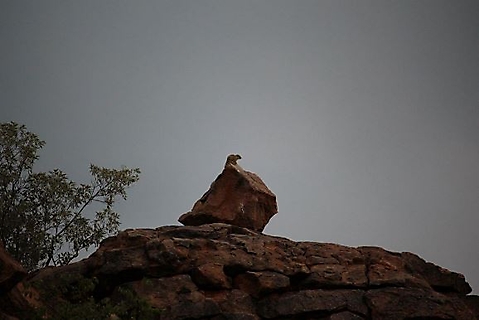 The rock hyrax or dassie, Procavia capensis in scientific terms, is a medium-sized, stocky and furry, terrestrial mammal native to Africa and the Middle East. In picture the hyrax is small for its rock.

The Dutch mariner, Joris van Spilbergen, who circumnavigated the earth from 1614 to 1617, found the dassies on Dassen Island west of Yzerfontein in 1601 “very tasty like lamb or mutton”.  Dassie skin cloaks and blankets used to be popular in southern Africa.

Dassies weigh between 2,5 kg and 4,7 kg, the male slightly heavier than the female. They’re up to 20 cm high at the shoulder, the body up to 60 cm long. The rock hyrax has rounded ears and a slightly pointed nose, its coat dark brown to yellow-brown.

There is also a yellow-spotted rock hyrax and a tree hyrax beside the rock hyrax depicted in the photo.

South African dassies live from the coast to the Drakensberg, as well as in suitable places inbetween. They prefer rocky boulders where caves, holes and crevices provide suitable options for shelter from cold and wet, also sanctuary from predators. Expelled males will live in aardvark holes, but dassies don’t dig holes.

The specially adapted muscles on the soles of their feet combined with the glands that keep the soles moist, allow dassies great agility among steep rocks and on tree trunks, negotiated in spite of their short legs and chubby bodies.

Dassies eat a variety of grasses, herbs, leaves and fruit, preferring their grass wet and their leaves dry. They have single stomachs, are thus not ruminants, so they can eat enough in less than an hour per day. They drink when water is available, but take enough moisture from wet grass to get by without drinking if need be.

These dietary features enable them to spend much time in their comparatively safe rock shelters, unless they perch on a cliff for sunning where predator approaches and escape routes require alertness and survival savvy. A roll in the dust keep parasites and flies at bay.

On cold days they huddle, while staying inside in the wet. For the rest the social life, usually from four to twenty-five members in a colony, keeps them occupied. An old female will usually serve as the alert sentinel when they're out. Black eagles and crowned eagles are the main dassie predators.

Male dassies losing out in the quest for dominance stay near but outside the colony's territory, as marked by the leader in urine and droppings. The fight for dominance involves front teeth, skill and ferocity; such issues not bothering lower ranks and submissive males.

Dassies seldom venture more than 60 m from their shelters. Trekking from suitable rocky territory only happens when food becomes too scarce. Overpopulation does cause problems, but numbers decrease when all can’t be accommodated regularly in the safe shelter space and the eagles start eating well.

Three or four babies are produced after a gestation of 230 days. They ingest foliage or grass from a few days old, while receiving milk from the mother for three months. A female produces offspring about annually.

Dassie noises include a shrill bark and a piercing shriek, as well as whistling, growling, snarling, gnashing sounds and more.

Dassie urine (dassiepis) that colours rocks near the shelter is sticky, used to form part of the paint used by traditional rock artists. The vertical salt stripes from the urine become dark on the rocks, disclosing where they live. This salt was used in medicines of olden times for the treatment of conditions like epilepsy, hypochondria, hysteria and seizures; apparently still used in the fragrance industry and maybe to make backyard gunpowder (Riëtte, 2016; Wikipedia).