Home » PARKS AND GARDENS » Mapungubwe National Park » Arrowmarked babbler
Back to Category Overview
Total images in all categories: 12,061
Total number of hits on all images: 7,359,607 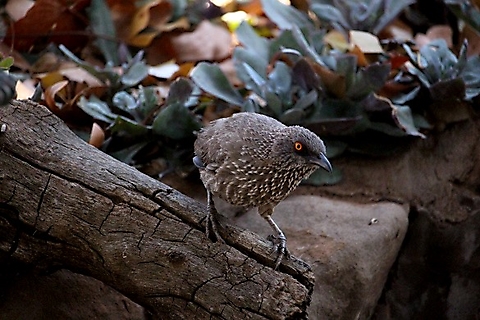 Previous
Image 1 of 17
Next

The arrowmarked babbler, in Afrikaans the pylvlekkatlagter (arrow marked cat laugher) and zoologically Turdoides jardineii, is found in South Africa throughout the land north of the Vaal River and inland in northern and central KwaZulu-Natal.

The white arrowhead markings are easily spotted on the grey-brown, feathery background. These babblers are gregarious and noisy. One or two will start calling, the rest (up to about fifteen in a social group), joining enthusiastically in a musically questionable racket that diminishes occasionally when everyone must be out of breath.

The birds find insects while jumping or darting about in low grassy thickets, bushveld, reedbeds or woodland. Spiders, snails and small lizards spotted serendipitously will do just fine as side dishes, fruits for dessert or salad.

The nomadic group is rarely closely together, forever strung out, following someone’s lead while stragglers nearly catch up or fly past as the lively troupe surprises communities of edible targets, in spite of their noisy travelling habits. Getting lost is very unlikely when their full voice rasping calls serve as road signs and social glue.

The nest consists of massed grass and twigs with the bowl-shaped hollow on top, lined inside with fibres and rootlets. The nest is built in dense bush, a tree canopy or among driftwood. Several members of the group contribute to its construction.

About three unicoloured, turquoise eggs are laid, incubated by the mother and several members of the support staff. Fatherhood is apparently a matter of vagueness and uncertainty, unimportant in the style of these sociable groupies. Even the duration of incubation and nestling are matters shrouded in mysteries of loose babbler living.

Loyalties are inclusive, the feeding of the young widely shared, while chicks learn from the outset that family ties equal clan ties. Or so it all seems to human observers early in the twenty first century (Maclean, 1993; Wikipedia).