Home » REGIONS » Namaqualand » Romulea flava
Back to Category Overview
Total images in all categories: 12,058
Total number of hits on all images: 7,353,530 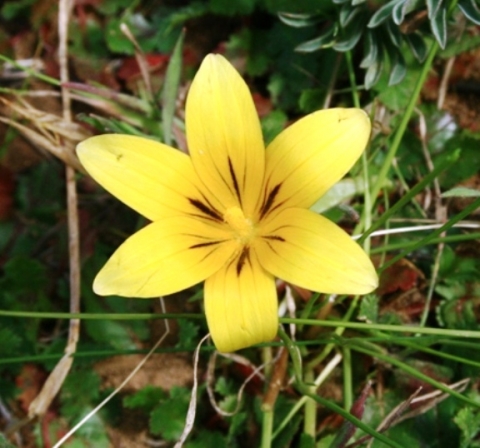 Romulea flava is a yellow or white (rarely also blue or pink) flowering member of the large Romulea genus of cormous perennials. They grow in the winter rainfall area in a variety of soil types, notably in Namaqualand as does the specimen in picture. The flowers have dark lines on the petal centres where they enter the flower cup. Every flower appears singly at the top of its separate branch. The fruit capsules are cylindrical (Pacific Bulb Society).

R. flava is mainly pollinated by the females of four species of bees. The plant is thought to be one of the older members of its genus, associated with one pollinator in a comparatively long-standing, mutually beneficial alliance. More insect species have joined in pollination activities for these flowers later, also some beetles and flies.

This genus has less diversity in its pollination modes than related genera with fewer species, probably because the flower structure in the Romulea genus has remained more unchanged in the course of its evolution.

There is some doubt as to whether this flower may be R. hirta (Bond and Goldblatt, 1984; www.mnhn.fr).