Home » REGIONS » Namaqualand » Senecio sarcoides or grootaster
Back to Category Overview
Total images in all categories: 12,058
Total number of hits on all images: 7,353,574 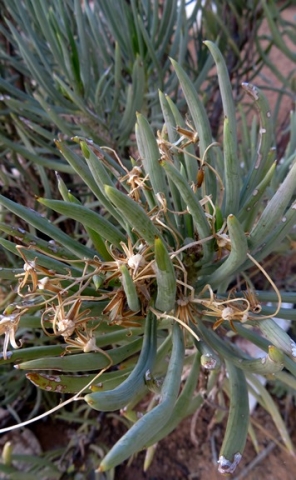 Senecio sarcoides is found about anywhere in Namaqualand.

Its sparsely branched, erect stems lose their leaves lower down. Dry leaves sometimes persist for some time on the lower stems. The leaves may be much greener where there is ample moisture, mostly more to the south of the plant's distribution where the rainfall is higher; pale grey-blue where the climate is harsh.

Small clusters of yellow flowerheads are seen in the latter part of winter and the early part of spring (Manning, 2009; Le Roux, et al, 2005; Manning and Goldblatt, 1996; iNaturalist).