Home » REGIONS » Namaqualand » Rhynchopsidium pumilum, a geelsneeu covering
Back to Category Overview
Total images in all categories: 11,894
Total number of hits on all images: 7,136,464 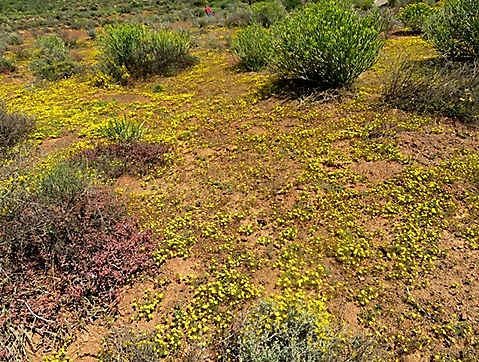 Rhynchopsidium pumilum does its geelsneeu (yellow snow) thing close to the ground, not quite on it. The ground cover of yellow daisies earns the plant its geelsneeu common name. It mainly grows on bare ground of the Namaqualand plains to as far southeast as the Little Karoo. The plants seen here are performing in the Biedouw Valley east of Clanwilliam.

Abandoned farm fields and other disturbed land worked long ago become the prime sites for these and other daisies to proliferate and return annually. Wind disperses the seeds that await winter rain before sprouting, blooming and setting seed again, all in one short living season.

The springtime effect is striking, in the absence of big shrubs and even stones on the often flat fields among the hills. All that had been cleared away for the plough.

Discontinuation of such land use was often caused by low rainfall patterns, rendering the farming practices of the times uneconomical. Deterioration of the soil from overgrazing and erosion, urbanisation elsewhere with concomitant depopulation of the rural land, the introduction of game farming and tourism, as well as sporadic mining, all played their part in the floral priming of Namaqualand.

The positive outcome was environmental enhancement into the “best” panoramas of spring daisy tourism for which these parts are famous.