Home » REGIONS » Namaqualand » Radyera urens, the sandpampoentjie
Back to Category Overview
Total images in all categories: 11,894
Total number of hits on all images: 7,136,492 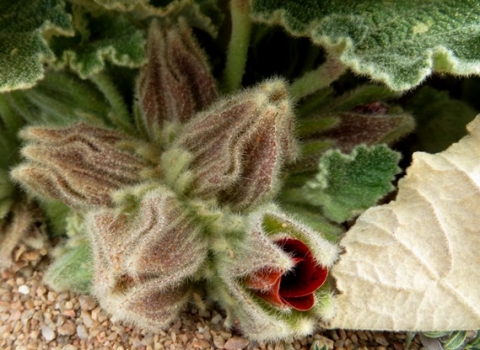 Almost every part of a Radyera urens plant has a hairy or furry surface, barring its petals. Margins tend to be hairier than surfaces.

Colouring of all plant parts is fairly subdued in the bright sunlight, except the corolla, the flag that beckons pollinators without waving.

The dark maroon sepals of the open flower, longitudinally ridged, acutely pointed and erect, still encircle the petals that are just shorter than them. They are parted without conviction, too close and protective of the petals for allowing them leeway.

On some buds in picture the still closed sepals cohere neatly along their adventurously curving margins.

Around the outside of the faint maroon calyces there is a second, even hairier protective floral coat visible, finger-like, green and short. These fingers are the epicalyx bracts grown around the sepal bases, not covering much more than the ovary. The narrow bract tips reach nearly halfway up the calyx-enshrouded bud.

The one lower surface of a leaf blade showing in the photo is almost white, velvety, its bigger veins prominent.