Home » REGIONS » Namaqualand » Searsia undulata, the Namaqua kuni bush
Back to Category Overview
Total images in all categories: 12,058
Total number of hits on all images: 7,353,554 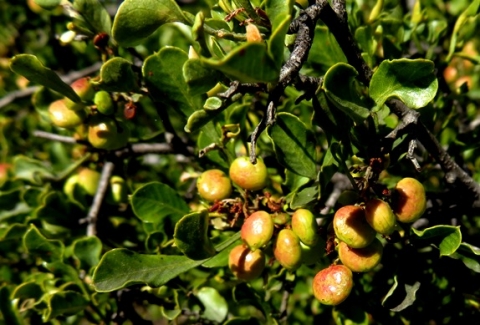 Searsia undulata, commonly the Namaqua kuni bush, is a variable plant resembling and probably closely related to S. pallens, S. burchellii and S. lucida. It is found in Namaqualand and southwards in the drier parts of the Western Cape to the Little Karoo.

The often shiny trifoliolate leaves and pale to red disc-shaped fruits are a common sight among the rocky hills of the Namaqua Klipkoppe, as well as among lowland vegetation as far southeast as the Little Karoo, but not in fynbos or renosterveld.

The colourful mistletoe, Moquiniella rubra, tends to grow on branches of this plant.

Long ago the Khoi people used parts of this bush in treating colds and women recovering from childbirth. Animals and children eat the fruit but the leaves are not browsed by stock or game.